Unfortunately this year due to Covid 19, we have been unable to welcome you into our school, however we would still really like you to explore Cumran, to see how our pupils learn and to experience just a little bit of our ethos. Therefore we have created this section with a selection of videos and our Virtual Tour for you to get a flavour of life in Cumran.

Please click on the links below to our Youtube channel to enjoy a snapshot of daily life in our school.

Our Virtual Tour of Cumran

Our virtual tour led by our pupils!

Look Up And Aim High!

Cumran Primary School, Clough tell the story of their involvement in Future Classrooms with Nerve Belfast

Pupils take you on a tour showing you how we use ICT to enhance learning in Cumran.

Please click on the link below to read our recent Outstanding Inspection Report - November 2019. 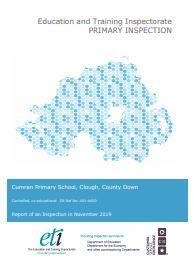 If your child is starting primary school in September 2021, you can apply for their place online from 7 January 2021 at 12 noon.  The closing date for primary one applications will be 12.00 noon on 29 January 2021.  Further information is available on the EA website under the Admissions section at - https://www.eani.org.uk/parents/admissions

In selecting children for admission, children resident in Northern Ireland at the time of their proposed admission will be selected for admission to the school before any child not so resident.

(i)      Preference will be given to the eldest first as shown on the birth certificate.

in order set out below:

Should a vacancy arise, the above criteria will be applied to select pupils from our waiting list.

Unfortunately not the ones with chocolate chips.

Some cookies are necessary in order to make this website function correctly. These are set by default and whilst you can block or delete them by changing your browser settings, some functionality such as being able to log in to the website will not work if you do this. The necessary cookies set on this website are as follows:

Cookies that are not necessary to make the website work, but which enable additional functionality, can also be set. By default these cookies are disabled, but you can choose to enable them below: